Yoga Philosophy and History and a Yin Yoga Exploration
with Chip Hartranft
A Weekend Immersion for Yoga Teachers and Interested Students
February 13-14, 2021

This weekend immersion is open to the public. Part of the Yoga of Energy Flow 200-Hour Teacher Training it will be presented virtually. Handouts and other resources will be provided.

This is an opportunity for yoga teachers and interested students to survey the millennia-long heritage of yoga, tracing its most significant developmental threads from the earliest ascetics to the present day, and also explore Yin Yoga, a practice with gentle but deep sustained stretches that stimulates the body’s internal energy system, invigorates the skeletal/connective body, and develops mindfulness, tranquility, and insight. 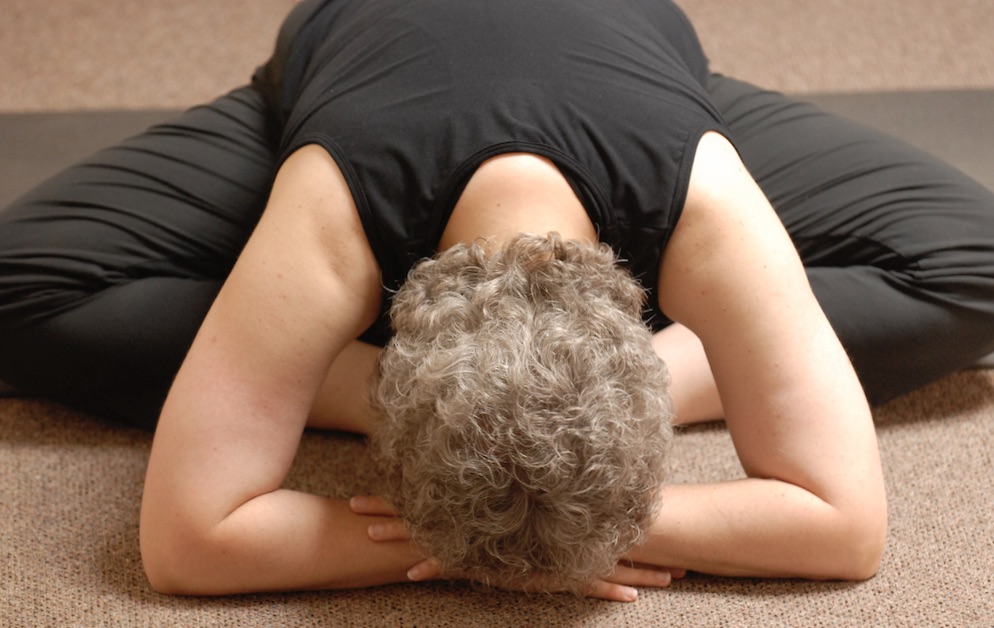 “Butterfly” a Yin Yoga pose to stretch the connective tissue of the the inner thighs, outer hips, and spine.

Sūtra: The History of Yoga Practice and Philosophy
Even for some of its most accomplished practitioners, yoga primarily involves pouring the energies of body, breath, and mind into series of postures ranging from soft to strenuous. This dynamic approach to developing flexibility, strength, and vitality – described by some as modern postural yoga – is the ‘baby’ in the family of yoga traditions, and is still growing: its practices have evolved and expanded more during the last 100 years than in the preceding 1000! Although its 10th century progenitors called it haṭha yoga, meaning the yoga of ‘force’ or ‘energy’, they understood it to culminate in the ‘royal’ rāja yoga – the path of meditative stillness and concentration, samādhi, as expounded more austerely by the Buddha well over a millennium earlier, and then centuries after that in the Yoga Sūtra of Patañjali and the Bhagavad Gītā.
So where does modern postural yoga come from? How did it emerge and flower from yoga’s roots in the soil of ancient Indian asceticism and then the meditative practices of the Buddha and Patañjali? This 2-part program presents an illuminated survey of the yoga tradition, following a 4,000 year long thread (sūtra) from the earliest images of quasi-yogic postures in the Indus Valley Civilization to our practices today. Along the way we’ll dive into the heart of yoga’s definitive teaching on meditation and freedom, the Yoga Sūtra, and later trace parallel webs of tantra that spun out the first haṭha practices – many of which might strike us today as bizarre or even dangerous! – presaging the popular, dynamic yogas that animate our 21st century dharma.

We’ll explore the:
• collision of Harappan and Vedic cultures that shaped and fragmented yoga’s subsequent development
• emergence of the ascetic ‘strivers’ (śramanā) and Jains with their extreme forms of self-denial
• meditation-based worldview of sāṃkhya, the proto-scientific foundation of early yoga
• parallel teachings of brahmin mystics in the Upaniṣads
• yoga of the Buddha regarding mindfulness of bodily & breath energy (prāṇa)
• understanding and implications of yoga as a liberation technology in the Yoga Sūtra
• tantra and the evolution of haṭha yoga
• relationship of modern postural yoga to haṭha yoga and the Indian independence movement
• international dissemination and flowering of yoga in the 20th and 21st centuries

Yin: An Immersion at the Deep End of Yogāsana
Yin Yoga is a style of practice that emphasizes sustained, gentle but deep stretches that stimulate the body’s internal energy system, invigorate joint and connective tissues otherwise neglected in dynamic styles, and develop the meditative factors of mindfulness, tranquility, and insight. Although today’s Yin practices have largely been synthesized from ancient Chinese yoga by contemporary teachers like Paulie Zink, Paul Grilley, and Sarah Powers, they come closer than any other form of modern yoga to the earliest known Indian āsana practices found in such seminal guides as the Śiva Saṃhitā, Haṭha Pradīpikā, and Gheranda Saṃhitā. As such, they are a powerful, time-tested vehicle not only for cultivating optimal health and vitality, but also for opening into the profoundest space of yoga: awakening.
Yin Yoga is a perfect complement to the dynamic and muscular (yang) styles of yoga that emphasize internal heat, and the lengthening and contracting of our muscles. Yin Yoga generally targets the connective tissues of the hips, pelvis, and lower spine.

This 2-part yin immersion will consider the:
• the physiological, neuromuscular, and mechanical effects of yin practice
• the cardinal principles of yin practice: force, timing, diversity, propping
• the relationship of yin to both meridian theory of traditional Chinese medicine, and the nādīs of haṭha yoga
• the cultivation of mindfulness, tranquility and insight

While initially this style of yoga can seem quite boring, passive, or soft, yin practice can be quite challenging due to the long duration of the poses. We can remain in the postures anywhere from one to twenty minutes! Yin and yang tissues respond quite differently to being exercised. You need to experience this to really know what Yin Yoga is all about. After you have experienced it, even just once, you will realize that you have been doing only half of the asana practice.
Bernie Clark, YinSights

Chip Hartranft’s work bridges the traditions of yoga and Buddhism. He is the founding director of The Arlington Center, uniting yoga and dharma practice, and has taught an integration of yoga movement and meditation in the Boston area since 1978.

An independent scholar of early Indian Buddhism and yoga, Chip is the author of The Yoga-Sutra of Patañjali: A New Translation with Commentary (Shambhala Publications), and teaches at Lesley University.

For yoga teachers, this immersion is available for CEUs, and will provide new materials and insights that can be brought into yoga classes.